The Dragons are an ancient race of powerful reptilian creatures. Born into this world during its creation, the Dragons are said the have shaped the world for the other races to inhabit. Each Dragon type to emerge represented one element; ranging from metals and gems to fire and frost. The Giants came next, shaping the land in finer detail, often changing what the Dragons had formed. This is thought to be the source of the fierce animosity between the two races. All Dragons can fly and possess powerful magical abilities and immunities, combining breath attacks with powerful claws.

--The Tome of Wonders 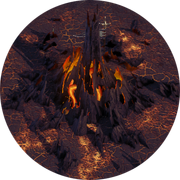 The Dragons still hold many of the dwellings they carved out in the dawn of creation and they are as intelligent and articulate as any other race, though they are also more primal too. They are born of the elements and their appearance reflects that, with the types of Dragon being very different from each other.

You can find their homes among ancient volcanoes, often with a few Dragons standing guard in their dwelling and a few Wvyerns wandering their territory. They will defend themselves from attack but may be open to diplomatic approaches. If you befriend them they will grant you quests from time to time with large rewards, being stronger items compared to what you would get from normal cities, Dragons, or often multiple Wyverns. The quests themselves however, are often great tasks involving strong armies of Giants or Archons.

If you conquer them or win their alligence through diplomacy then you will be able to produce your own elemental fury-breathing lizards. First, there are the Wyverns that can fly, have good resistances and deal decent damage. But after a few upgrades that cost a lot of gold and time, you can produce your own Dragons. These are the true powerhouses of the elements, with massive resistances and abilities that rival a lot of the most powerful spells in the game. They are very expensive to produce, but will prove worth their money as they rank among the strongest of the highest level units.

Orb of the First Age

'Of all the wyverns I've raised, Firebolt is the only one I kept. He's also my friend. I raised him from an egg. To care for him, I build a large bonfire and let him take a fire bath. In the winter months, he practically lives in the castle furnace room. Of course, I love flying with him. Though his bite is dangerous, he's never hurt any man who didn't deserve it. Once, he rescued me from a man, Birt, who demanded I marry him. I don't know why he hates Firebolt. Sure, he lost a leg, but his other leg is perfectly functional.'

'After Artica disappeared, our people abandoned the temperate lands. Het ice domain melted. We returned to the northlands where perpetual ice grinds the rocks. There, we discovered offshoots of Frost Dragons, called Frost Wyverns. They are small enough to serve as mounts for the bravest heroes. They have a vicious bite, and are excellent fliers. Their immunity to the effects of snow and ice make them very mobile in the winter months, when most animals would stay in hibernation or tunnel beneath the snow cover. A few of our kind have made a decent fortune trading Frost Wyvern eggs for High Elf magic.'

'The gold wyvern spiraled down to the battlefield with a trumpeting cry. Its swordlike talons crunched through the skull of a troll. Its teeth sunk into the monsters neck. A flame tank discharged a torrent of fire over the company, singeing friend and foe alike, but the Gold Wyvern's scales sparkled with renewed health. It launched into the sky seeking a blight-tusk boar. It landed on the vile thing's back, carving out a mass of rotted flesh. The boar spun and struck the sturdy wyvern, denting a scale. Still, no sickness grew in the small wound. The wyvern slew the sickened boar, then flew to hunt new prey.'

'The desperate folk knew the risks, but the earth was fertile and they had nothing. Within two generations, they were all wealthy due to the number of their flocks and herds, the bountious harvest and clean water. It's all gone now. The mountain did not erupt. It gave birth to something worse. A dragon of ancient days has returned to claim these lands. Its breath left their homes in heaps of ash. It consumed the livestock and villagers alike. What treasure they once had now belongs to the beast.'

'Beginners in the dragon slaying business should start with a Frost Dragon. They are strong flyers, but their brittle frosty scales are susceptible to fire attacks or the blunt strike of a good dragon slayer. Of course there's a technique to learn and their frosty breath will freeze you solid if you don't prepare. I've lost count of the number of blue-skinned I've had to chisel out of glaciers because they had no extra protection from the cold.'

'Shadowy twitching cadavers surrounded us. I prayed in despair, knowing our corpses would soon join the Necromancer's army. Then it appeared. The Embodiment of Hope! The Golden Dragon burned through the blackness with its fiery breath. Fierce and aware of every enemy no matter how it attempted to hide in the dark. The Necromancer launched waves of wicked magic that the dragon shrugged off. Its fangs and claws shredded hundreds of undead. We charged in, joining the fight, suddenly inspired by the very honor that we had a moment to fight alongside this noble creature.'

'Despise me if you must, but I live in truth. My way is your way. Even the mightiest immortals fail, and all that remains are the fragments of the greatest lie, the lie called 'life'. We are but puppets to the spinning darkness, and my mighty bone dragon rises to play that role until the end of days. Mightiest of all undead, let envy be your strength and break the living. Breathe blight upon all that fear and hate, and tremble before my beloved mistress Death. Fester. Corrode. All succumb to her call.'

'We ventured into the blight, looking for any living thing capable of resisting its sickening effects. The passing days darkened our minds, until even looking at the sky burdened me. We were easy prey to the Bone Wyverns. Being undead, they hunted not for food, but our of pure enmity against anything with a heartbeat. I gathered my wits. I am the Allfather's servant. Their jagged teeth and swordlike hind-leg claws shredded the man beside me. Humbly penitent, I clutched my holy symbol. The pure light of creation filled me. We would survive.'

'Of all dragons, the most coveted I hunt are Obsidian Dragons. Their scales are more precious than jewels. I remember the first time I hunted one. The creature attacked at night, but day or night, you won't see it coming without magic. It doused our camp with its inky breath that made us all weak as kittens. We hid, but it spotted us and slew every hunter. I survived only because a wandering Halfling fell into a well. In attempting to fish him out, in my weakened state, I fell in myself. The dragon could not reach us down the narrow shaft.

'I've never considered myself a hero. In fact I'm more of a coward. The reason why I am still alive is simple, I give all credit for my survival entirely to my steed Foxy, an Obsidian Wyvern, whose skill in flight and stealth has kept me alive on more than one occasion. I prefer to use her as a spy. She sees everything. With the exception of a full grown dragon, she can take care of herself against anything with hostile intentions. Of course, Foxy's something of a coward too. If we run up against something too tough, she'll be the first to flee.'

This Unit is not available in the Dragon's Peak