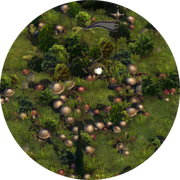 The Fey are a fickle group that don't reside fully in the real world, and they are a highly magical people found deep in the rugged parts of the forests of the world, far from civilization.

They are for the most part more fragile than the other races, while dealing Tons of Damage, coupled with some supportive abilities. They can be used on the front lines but a full army of any of their units is asking for some serious area of effect damage to wipe them out. Also, since they all have serious blight weakness, any army consisting solely of Fey is sure to be short-lived - once detected.

They are not always friendly to their neighbors and not all of them are good or neutral but for the most part they are a good dwelling to befriend at the start of games as they give simple quests that are easily completed using few units. If met during the mid or late game they are most likely under the control of somebody or easily conquered using tier three units and above.

The three different types of fairies all have different roles, with the Buttercup Fairy offering both Bard's Skills and strong ranged attack, arguably being one of the strongest Tier 1 units in the game. Toadstool Fairies have blight damage on melee attack, making them the best units versus other fairies. Nightshade Fairies are invisible and have one of the highest damage potentials on ranged attacks. Aside from the fairies, the Sylvan Court also gives access to Nymphs, at Tier 2 the cheapest unit with Seduce, and also featuring Befriend Animal, and is the only non-hero that could potentially take control of 2 units in one battle. The Unicorn gives easy access to spirit damage, while not having bad stats for a Tier 2 unit.

'I believe they were watching a group of children playing. To them, the laughter of children is intoxicating music. So when the troll lumbered from the trees, before I could raise and alarm, the whole meadow of gold flowers erupted revealing a swarm of buttercup fairies. The troll never saw it coming. They darted with deft wings in and out of the reach of the lumbering creature, stinging it with blasts of Fairy Fire from their hands. They struck the monster and drove it back into the depths of the forest, undeterred by the foul breath of the creature that made my stomach lurch.'

'I don't know if Toadstool Fairies favor toadstools, but they are called such because they are most frequently encountered by hedge witches and magicians who rummage in the depths of forests for reagents for potions: Shelf fungus, mushrooms and rare woodmold. I once watched a single toadstool fairy drive a group of apothecaries out of its territory, whizzing about, blasting fairy fire, and hiding when not attacking. One man attempted to use a wand against the creature, but it laughed off the magic and burned a hole right through the seat of his pants.'

'The Nightshade Fairy is perhaps the most powerful and elusive specimen of the fairykin. It is difficult to describe because it is invisible to the natural eye. They are territorial, and flit about protecting their wilderness areas. I once observed one fairy methodically decimating a village of goblin settlers. The Nightshade Fairy giggled as it attacked them with poisons, magic and the elemental forces of nature. It could teleport within and without the walls of the town, never staying in one place long enough to be seriously hurt. It tormented the goblin elders, setting their headdresses ablaze with fairy fire. Day in and day out it tormented the garbage dwellers with its fairy mischief, until they abandoned their hovels.

'Fairest creature of the forest mists,
a regal ringing voice persists.
A horned stallion appears fantastic,
even singing that friendship is magic.'


'A glow of power, it teleports fast,
beauty and grace, never surpassed.
It prances for a song of ponies born,
impaling evil on its enchanted horn.'

--Dance of the Unicorn, by Willa Lovaday, Master Bard

'We heard a musical laugh and saw a splash. None of us could turn away. A girl, impossibly beautiful, bathed alone in the spring. The sway of her hips made the ogling men groan. Soon, it was all we could do to please her. Even the caravan's livestock obeyed her. And we would have done anything for her to scratch us behind the ear the way she did my horse. We fought to give her everything we had, and she rewarded us with a touch on the chin. It was more than generous so we wished her happily on her way. Eventually we came to our senses. None of us wanted to report to King Jorsen how we'd given away all our treasure to a forest nymph, so we pummeled one another and told him we'd been robbed by bandits.'

Concept Art for the Sylvan Court 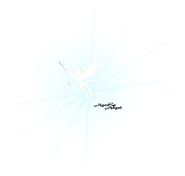 Wisp (from screenshot)
Community content is available under CC-BY-SA unless otherwise noted.
Advertisement