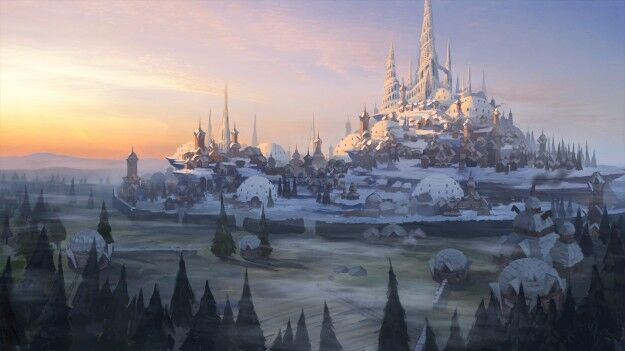 The Frostlings were publicly announced in the Explorminate podcast on the 27th of November as a likely part of the Necromancer DLC (http://www.explorminate.com/podcast-7-triumph-studios-interview/). Few details have been released except that they have bred with the Frost Witches, and this will be reflected in their unit roster.

One of their racial characteristics is the Fast Embark ability. This allows units with the ability to disembark without additional movement costs, and to embark with as little as 6 movement points remaining (although embarking still drains the units remaining movement for the turn).

Historical information on the Frostling lineups can be found from the associated pages on the Age of Wonders Heaven sites:

Frostlings are a race of humanoids that settled in the cold northern regions long ago. Gradually adapting to the harsh winter clime, they possess a pale complexion and large, beady, deep-blue eyes. Often called Snow Goblins or Ice Devils the Frostlings have been at constant war with people living in more comfortable climes.

After the Second Age of Wonders, the Frostlings retreated deep into the lands where winter never subsides and the sun’s rays have no power. There they evolved by mating with native Frost Witches. They developed a strong resistance to cold and some Frostlings gained magical abilities.

Frostlings embark on frequent raids on warmer lands. Their seafaring skills, offensive fighting style and frost magic strike fear in the heart of the peoples they raid. But Frostlings are even more deadly in their home arctic clime, where they build big cities crafted from ice. Their matriarchal society is governed by chariot riding Frost Queens.

Frostlings are a proud and sturdy race, which have been moving towards a matriarchal society since the Frost Witches first befriended them. Their Kings today are always chosen by the High Queen and it is she who ultimately rules all the Frostling clans in the Kingdom together with her chosen husband. It is quite common for a High Queen to go through multiple Kings during her reign. The clans have a high degree of independence, but the situations where a clan goes against the explicit wishes of its High Queen are rare and usually fuelled by powerful Frostling women.

The Ice Queen (not to be confused with the High Queen!) is the prime example of how the Frost Witch blood improves the race as a whole. Talented women with a large amount of the magical blood streaming through their veins can become Ice Queens, who really allow the Frostlings to shine on the battlefield by bringing the full power of the icy North to bear.

Men with a lot of Frost Witch blood can become Royal Guards. They are highly trained men that use the magic in their bodies to a dangerous degree, transforming themselves into beings of ice in order to better protect the all-important Ice Queen and other Frostling women.

Most Frostling Lords and Ladies tend to have quite a bit of Frost Witch blood in their veins as well, making them taller and subtly different in appearance from standard Frostlings. It also grants them higher immunity to the cold. In courtly circles it is a matter of pride to show this off by foregoing the normal heavy thick furs and dress in light ‘summer’ clothes. 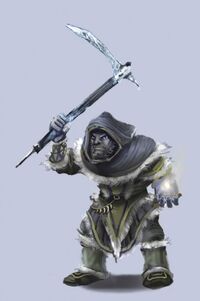 The Tier 1 Icescapers have their origins in Frostling city building; they have the ability to magically form and scape ice. The Icescapers’ ice balls damage and

Freeze units at a distance. Their ice pick has the Shatter Strike ability which inflicts extra damage versus

frozen units. The Icescaper pairs well with the Frost Witch as she can cause

Weakness with her Inflict Chilling ability, making the Icescaper to be much more effective. As all Frostling units, the Icescaper has the ability to Fast Embark. 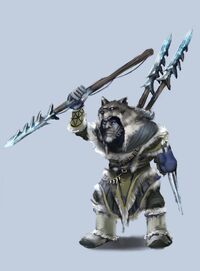 The Harpoon Thrower: Accustomed to life in the Nordic tundra’s and ice floes, the Harpoon Thrower is primarily a hunter. During times of war however Frostling Queens and their Kings are happy to employ them as

physical damage, has a chance to

immobilize the target for two

turns. Unique among archers, the Harpoon Thrower can use its Harpoon as a makeshift

Polearm, to stave of

charges and deal extra damage to all kinds of mounts, as well as to drag down 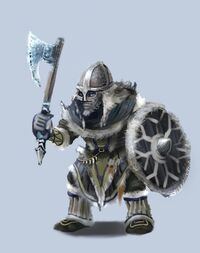 The Raider: Raiders are somewhat hunched over diminutive warriors not to be underestimated because of their size. They are perfectly adjusted to terrorize and plunder the softer races living in warmer climes. Like all Frostlings they have Fast Embark to surprise enemies from the water. If you think to hide behind walls or hastily made barriers think again! Their Frost Axes have the Demolisher ability, which allows them to deal 4 extra damage versus obstacles and machines, and they also have

Improved Wall Climbing which means they don’t suffer any penalties when scaling a wall. Imbued with the cold energy of the Icy North their

frost damage in addition to

After a successful forage the Raiders quickly vanish into their icy domain, aided by their 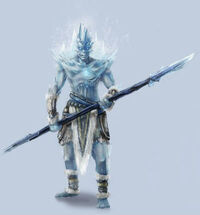 The Royal Guard: Changed to a high degree by the frost magic blood of their ancestors these men live to guard the Frostling women.

Pikeman first and foremost, they strike first and deal more damage to and have higher defense against

Mounted units and flyers. Their active ability is Pledge of Protection, which can only target Frostling women, gives the Guard +2

defense and redirects any damage done to his charge to the Royal Guard, mitigated by 35%. Their Frost Weapons

Inflict Frostbite and being made of ice gives them

Arctic Concealment. As a last line of defense, once they succumb to their wounds the magic in their frozen bodies causes them to explode and deal damage to all enemies around them.

The Mammoth Rider: Lords of the Battlefield, Mammoth Riders tower atop their huge beasts, surveying their surroundings and forcing breaches in the enemy’s defenses. The massive beasts can take a lot of punishment and deal severe damage. With their massive tusks the Mammoths can easily destroy walls, and their big bulk enables them to perform an especially powerful Devastating Charge. If you manage to keep them alive long enough they learn the rampaging

Killing Momentum ability, giving them back 1 action point and allowing them to move 1 additional hex after killing an enemy. 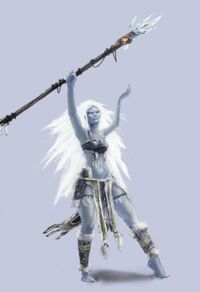 Fey creatures of the arctic. After they were absorbed into the Frostling race, the Witches were treated with something almost resembling worship, and they have been held in high regard ever since. The most powerful of them are elevated to Frost Queens. The Frost Witches’ Castigate ability throws Frozen Flames (a mix of fire and ice) at enemies. Futhermore, her attacks Inflict Chilling, making enemies more vulnerable to

fire to melee and ranged attacks. 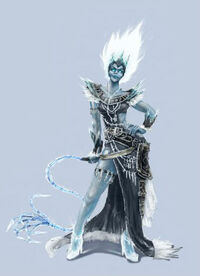 The Ice Queen: The ultimate Frostling

support unit, the Ice Queen is a formidable opponent, especially for races not suited to the cold. Riding a chariot drawn by polar bears, she brings her Dome of Frost wherever she goes. All units which aren’t Frostlings or have

Protection and who stand next to her suffer -1 defense, -1 resistance and get a bit of

frost damage each turn. The Ice Queen can cast an Ice Nova, which deals

Inflict Freezing Cold. It also breaks the guard stance of all enemy units within a 3 hex radius. So you can see why you’d want to protect her!

Even on the strategic map the Ice Queen supports her race with her Arctic Nova ability which spreads the Arctic climate in an area around her, but which costs her her life(Editor's note:This part is even less sure than the rest).