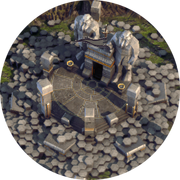 Giants are one of the oldest races in the world, and this shows in their appearance as they are much more primal than other races and much more linked into the elements themselves.

They live in secluded keeps for the most part, often near a node or other structure dedicated to the elements. They are, for the most part, friendly to their neighbours unless roused, in which case they are a dangerous threat. Giants can be hard to kill due to their massive defensive stats and inherent resistances, as well as their strong abilities, but it can be done after a long siege due to their comparatively low production scores.

If you conquer or befriend a Giant's Keep then they will swear allegiance to your cause and you can then produce your own giants. One is the Stone Giant with their massive pickaxe and ability to throw large boulders. They are a walking, living siege weapon and can fill this role very well. Then you have Frost and Fire Giants, which are much more focused on melee combat than siege warfare with devastating abilities and dangerous weapons.

Their keeps are often enchanted with powerful magics that give their troops defensive bonuses, and do not have walls, instead trusting on the strength of their arm.

Burrow of the Degenerate Children

'Some of the more depressed monsters I deal with often are Ogres. They're moody, pouty monsters, too large to be humanoid, but lacking the skills of giant kin. They cannot break down city walls, climb mountains or hurl boulders. They also make lousy cooks. I try to remind them they're still capable of beating anything with their sizable club. I suspect they'd be happier if they didn't decorate their clothes with bones, but ogres are stupidly fixated on bony décor. I suppose that's symbolic of something.'

'The passage swept downward. The air was hot as a furnace and smelled of brimstone. My heart raced as I saw an orange glow. The Fire Giant stood in a pool of molten lava. Its skin was rippled with veins of glowing magma, its beard a fan of flames. It held aloft a sword that was little more than a column of flame. It wore black iron armor, and I groaned. Unsheating my blue blade, Frostbiter, I knew that even with magic, we would not pass this way without burning.'

--The Seals of the Firstborn, Malakite Stone, Dwarf Explorer

'When the city of Icefell was taken by Commonwealth conquerers, I fled into the ice floes. Unaffected by cold, my Frostling people made peace with the Frost Giants ages ago. I convinced them to save us. They relished the cacophony of combat, blasting our enemies with an avalance of ice blows from their hammers. Of course, in their zeal to save our city, they broke down the wall, but eventually I got their attention before they leveled everything. Our friendship with these bellicose giants is priceless.'

'The rock-encrusted brute was like a hillside with legs. It lumbered forward hefting in its hands a stone fragment larger than my mother-in-law. I dove through a great stone arch, before realizing it was a second Rock Giant. The two behemoths faces off against one another, as I scampered into a small hiding place. The first hurled his boulder against the head of the second, but to my suprise the second caught it out of the air. They started to wrestle, destroying cliff walls and reshaping the earth, completely forgetting about me.'

Art for the main Giants 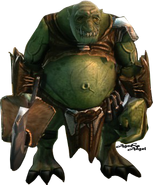 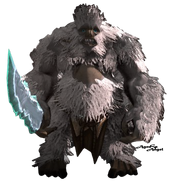 Yeti (from screenshot)
Community content is available under CC-BY-SA unless otherwise noted.
Advertisement