< Necromancer
Edit
watch 01:36
We're Getting Mutants in the MCU - The Loop
Do you like this video?
Play Sound 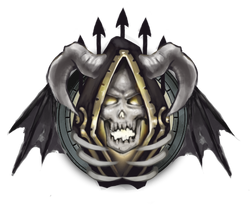 The Necromancer class has been confimed by Triumph to be featured in a future expansion/DLC. See Also: 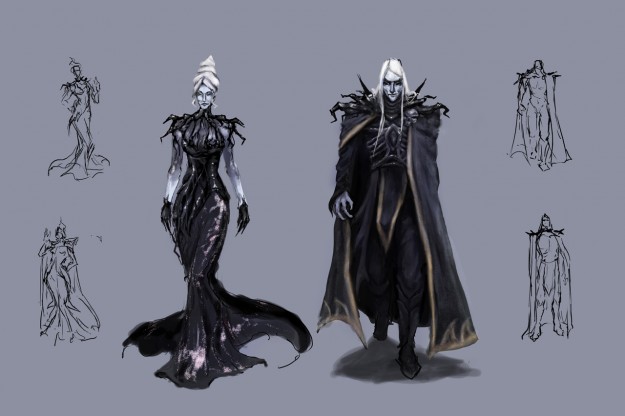 Concept art for the Necromancer Leaders

The information below has been taken directly from the news posts and bundled for convenience. 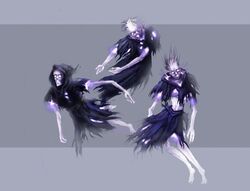 These are the souls of troubled people who are not able to find rest, even in death. Lost Souls are incorporeal, making them hard to kill with physical damage, and have the Exploit Despair ability, which allows them to deal extra damage against units with low morale. When fielded with higher level Necromancer units that can reduce the morale of living units, the effectives of the Lost Souls can be greatly enhanced. Defeating a Lost Soul during combat is tricky, as it also has the Undying ability. Undying units automatically return from the dead after a few turns in tactical combat. Lost Souls float, and can be summoned onto the world map, making them great scout servants. 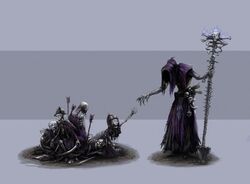 The Reanimator is the main support unit for the Necromancer. It is able to heal undead units, which is vitally important as most of them don’t naturally regenerate. The Renanimator has a Black Bolt ranged shot and a melee attack with its staff which doubles as a shovel. His attacks Inflict despair, giving him the chance to lower the morale of enemies.

These cadavers crawl over one another like the maggots they contain. The soulless bodies know no fear, are resistant to many types of damage and can be used to tie up enemy units while the more powerful necromancer units get into position. 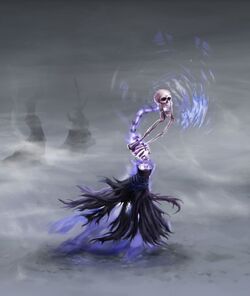 Tier Unknown(most likely T3)
This is an offensive support unit which can debuff enemies with its radial Wail of Despair ability. This eardrum busting screech makes affected enemies more vulnerable to attacks from other Undead units through the morale penalty it invokes. Additionally, the wail causes blight and spirit damage – the Banshee has bad corpse breath apparently. The unit has Phase and Pass Wall, making it easy to enter the midst of enemy lines to unleash its screech. 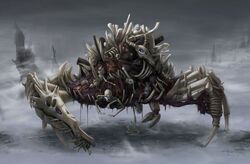 The Bone Collector is a massive tank unit that feeds on – and gets buffed by corpses.

The bone collector is constructed from of a giant pile of bones of various creatures. When moving it resembles a giant crab; using a dragon’s skull as a giant pincer melee weapon. It has the ability to collect the bones of dead units, and add them to itself, which heals damage it has sustained, and also provides it with a small buff to attack and defense, making the unit more powerful for each body it eats for the duration of the battle. To top it all off, this unit has wall crushing and undying, meaning the unit reassembles itself after death if the enemy takes too long winning the battle.

A battlefield shot of Bone Collector (on the right). 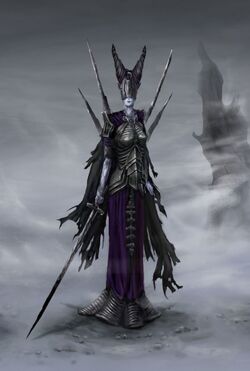 The Deathbringer was designed to be able transform enemy units into ghouls during battle. Although this is a strategically interesting and powerful ability, some of you pointed out issues around dealing with infected units in your ranks, such as how easily they could be cured and how much of a burden it would be for non-necromancer players to have undead-ified units under their control. To try address these we’ve changed the design so that the Deathbringer can curse units during combat. If the cursed unit is then killed, it will come back as a Ghoul under the Necromancer player’s command after combat, if that player is victorious. If the other side wins, the corpses are considered to have been burned. There is no infection through mere damage (this would be OP and bring about the Ghoul apocalypse a little too easily J ). This way it is a reverse style of resurgence with no post battle healing frustration for victorious players facing Deathbringers.

Although not the hardest hitting melee unit in terms of physical strength, the Deathbringer has a phase like ability and backstab, making her a very dangerous opponent. When you are fighting a battle and about to lose, keep your more powerful units away from her or you might encounter them as Ghouls during a later encounter.

With the visual design we aim to move away from the standard vampire type. She is hardened for battle looks menacing, spiky, her rapier made for the final piercing strike bringing unlife. 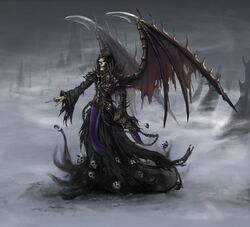 The Dread Reaper remains the master of death and is the Tier 4 Necromancer unit. His lengthy list of abilities include the core undead / incorporeal stuff and it’s worth noting the new Dread Reaper is able to fly. Its attacks are enhanced by Energy Drain, which drains up to 50% of the move points from enemies. The Reaper’s ultimate attack is Invoke Death; the target must resist or die. If the unit resists and lives it loses a big chuck of its hit points, which it cannot regain during the battle (no healing!).

Can nothing stop this horror? Well, the strongest of the Reaper attacks only works on units with a pulse. And because it is undead it is subject to certain counters like Spirit attacks. Players facing Reapers should use Ranged attacks. Invoke Death is short range and the Reaper’s Fearsome ability can only panic melee units. Some additional Undead counters are placed in new specializations, which we’ll reveal soon. And you might be relieved to hear this unit doesn’t have Undying.

The information below has been taken directly from the news posts and bundled for convenience.

Whispers of the Fallen[]

This global sustained spell allows the Necromancer to listen out for the spirits of the recently fallen to see details of battles which would normally not be visible. Any battle that takes place within a certain distance of the necromancers cities or fortresses can be seen by the player. The player can watch a replay of the battle, and the hexes where the battle took place are explored on the map. Great sustained low level reconnaissance / early warning spell.

The return of an Age of Wonders favorite, now with improved particle and sound effects. Causes the corpses of dead units to explode violently on the battlefield. Each corpse deals physical and blight damage to all units in the vicinity. Careful tradeoffs must be made, as the Necromancer has many other uses for bodies.

This spell sacrifices population on the target friendly city in order to spawn an undead unit. Available Undead include the lower tier Necromancer units, but more powerful creatures such as wraiths will sometimes appear. This spell is great for last ditch defenses

Instantly rebuilds a target razed city and transforms its population to undead, so all the units produced in the city become undead Ghouls. An Evil Necromancer can purposefully deploy a scorched earth strategy to gain undead populations in this manner. For more on Ghouls see the Cities of the Dead Development Journal

Infected rats infest the target enemy town. Every turn a few hundred people will die in the town, while at the same the nearest undead city you own will gain the same amount of population. Since undead cities gain population much more slowly than living cities, this spell is an important part of the necromancer’s economic strategy.