Reskar Scapeshaper is a Draconian Arch Druid Leader, and one of the major characters of the Elven Court Campaign.

Reskar appears in all Elven Court missions but the third(Faith Reborn), being the

Leader in Promised Lands. In all other Elven Court missions where he occurs, he is a

Hero on the player's side.

Reskar does not appear in the Commonwealth Campaign.

Reskar does not appear in the Golden Realms Campaign. 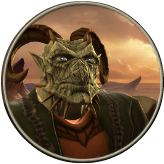