This is archived content of this page from before the expansion. See Shadowborn for the actual page.

The Shadowborn will do anything to achieve their goal; they won’t back down when it comes to manipulating and deceiving the people or causing death and destruction. As a Shadowborn you will become truly

Shadowborn has been announced as an adept/master specialization for the upcoming expansion : Dev Journal

All Skill description are copied directly from the Dev Journal.

Let your city’s population embrace the evil within them with the Embrace Darkness spell. Cast it on a city and all newly produced units are now

Dedicated to Evil and have

Do you want to screw over

This Tactical Combat spell will only affect your darkest units. Once cast, it gives your

Dedicated to Evil units two random dark powers. They will have these powers until the end of combat. Which dark powers your units get will be a nice surprise every battle you cast the spell.

As a Shadowborn player you will probably want migrate your newly captured cities to your own race. Mab’s Boon gives a boost to your newly migrated cities. The Empire Upgrade gives you extra

turns in the city you just migrated.

Summon Spell The ultimate evil unit you can summon as a Shadowborn master. Shrouded in darkness, she is a powerful force to be reckoned with on the battlefield. This

Good Slayer, but what makes her truly terrifying is her Petrifying Scream she can use once per battle. The scream can leave her living opponents

Petrified, unable to take any action. 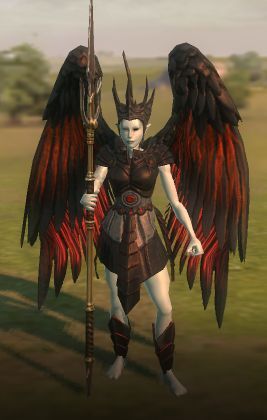