This race is exclusive to the Eternal Lords Expansion

--The Tome of Wonders

See also Tigrans/Announcement for this page as it was before release.

The Tigran can require a great deal of practice to play correctly. Their army's low resistance makes them difficult to understand at first. Unlike the orcs, the Tigran lack Victory Rush and the sheer hit point advantages to be effective brawlers. Instead, they rely on speed and abilities to do their damage. This makes them a natural fit for the Rogue, which can enhance the strengths of the Tigran very nicely. Conversely, this can also leave them in a bind in situations where speed and abilities aren't cutting it.

On the other side of the spectrum is the player who wants a less fragile and more orthodox army. This individual will want to consider giving the Archdruid, Dreadnaught, or Necromancer a try. The Archdruid provides an endless rank of cheap and expendable animal units and heavy summons to reinforce the Tigran troops, while the Dreadnaught can provide golems to tank hits. Necromancers can seem to be an odd choice, but with a little practice a Necromancer Tigran can be effective. Bone Collectors can essentially replace the majority of Tigran racial units on the frontline and Healers of the Dead can give the player some desperately needed regeneration.

'Entering the Tigran camp, I instictively knew our best course was to surrender; especially as I saw the long-legged, spotted cheetah-ladies who served the settlement as its hunters. I tried to warn my party that it would be futile to run away. Sadly, my message didn't get through to all, the back of the party fled. Before they could even scream, the Cheetahs pounced. Their extended claws slashed the fools. I will spare the reader a description of all the blood.'

'The double-bladed skalj buzzed over our heads like a swarm of angry hornets. A group of Tigran Shredders flanked our diplomatic envoy. Our maddened horses charged furiously forward. The cabin of our carriage filled with a spray of splinters. Hundreds of Skalj blades embedded themselves into the side of our vehicle. Hostile Tigrans scrambled up the carriage walls. They cut the troats of our drivers and let our horses run. The diplomatic message was quite obvious.'

'The Tigran Sun Guards encircled the Shrine of the Scarlet Destroyer. I tried to convince the feline spearmen that in the Commonwealth, all share the Shrine, but they believe those shrines hold pieces of their god, Yaka. Though they had little armor, their catlike agility rendered our archers ineffective. We had to clear them out, but they fought with the ferocious zeal of jungle cats. I fear the cost to the Empire if all our shrines are so abused.'

'The most gifted battle surgeon I ever met had a gift for cutting up bodies. Apparently he'd witnessed his father, a Tigran Prowler, eviscerate many a foe. The cat man was dark like the night with eyes like amber jewels. He could disappear in the shadows of the trees. Unfortunately, he ran away when the city guards caught him selling our healing herbs on the black market. They say he clawed his way up the city wall and was away before any of the guards could reach him.'

'The Tigran religion has changed since I last encountered them. They once envied men, doing all the could to prove they weren't animals. Now there is a powerful faction of Mystics that teach them to embrace their inner beast for their sun god. Some Mystics literally do. One morphed into a ravenous hellcat. Despite my most desperate attempts to reason with it, the creature tried to eat me. So while pretending to fight, I deliberately tripped and tumbled down a gorge.'

'Yaka dresses in Destroyer's Flame. His breath is the Heat of Life. I serve the god of the Greatest Star. Yaka raises His head in the morning, drives His chariot across the sky, and hides His face at night. I revere Him by throwing beams of pure sunfire. My shield enables me to embrace Yaka's body. My mane is His corona of fire. I am His devout tribute.'

--Prayer of the Sabretooth, by Charioteer Felixine

'We all knew what dwelt in Hillside Tomb. The clever thing offered fortunes to anyone able to outwit it. Caleb Withers went in a beggar and left as royalty, but thousands of others never returned. The Commonwealth judged this bargain illegal. They brought their war machines against the creature. It called down the sun to incenerate the advance. It retreated into its lair. Foolishly, they followed, but it was ready. Traps slowed warriors; the creature finished them off. Even disciplined troops trembled with fear. Eventually, the Commonwealth drove it away using overwhelming numbers. That's the price of bargaining with a Sphinx.'

--Monsters of Hillside, by Olden Withers

Racial Governance is part of the

expansion.
Note that only 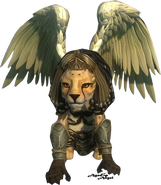