The newest race on the Blessed Continent, these savage hunters employ the powers of the great cats to stalk their foes. They are quick and secretive, enjoying a rich lifestyle. They spend much of their time in pursuit of spiritual mysteries. They have unlocked many, and are guided by mysterious beings with the power to bend the wills of men. Tigrans reflect the image of their creator, the fire god Yaka. The most powerful followers of Yaka fuse with the element of flame and can conjure bolts of fire upon command.


Their homes are great structures of sandstone, which blend into the desert sands. Most Tigrans appear as beasts, but their appearance is deceptive. They are experts as spies, and relish the enemy that underestimates their capability. They have a hunger to rule over other races, and when placed in positions of power, they expect to be pampered and spoiled as any cat.

The Tigrans were created prior to AoW2 by the fire wizard Yaka as a replacement for the Azracs, which had disappointed him by being militarily defeated during and after AoW1. However, the Tigrans lacked the loyalty of their predecessors, and a number of Tigrans turned away from Yaka, seeking independence or new alliances.

The historical Tigran unit lineup can be found here on the Age of Wonders 2 Heaven site. 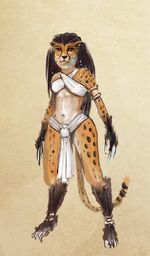 "Entering the Tigran camp, I instinctively knew our best course was to surrender; especially as I saw the long-legged, spotted cheetah-ladies who served the settlement as its hunters. I tried to warn my party that it would be futile to run away. Sadly, my message didn’t get through to all, the back of the party fled. Before they could even scream, the cheetahs pounced. Their extended claws slashed the fools. I will spare the reader a description of all the blood."

– “Where’s Symba?” by Ham the Wanderer

The Cheetah is the Tigran’s tier 1 predator skirmisher. They have the ability to pounce, a fast attack that teleports the unit behind its target allowing it to strike without fear of retaliation. After a Pounce the unit automatically enters guard mode. Cheetahs also have the ability to inflict bleeding wounds, which synergizes with the Bloodthristy ability of some other Tigran units. 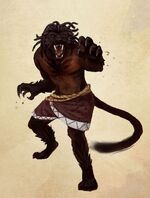 “The most gifted battle surgeon I ever met had a gift for cutting up bodies. Apparently he’d witnessed his father, a Tigran Prowler, eviscerate many a foe. The cat man was dark like the night with eyes like amber jewels. He could disappear in the shadows of the trees. Unfortunately, he ran away when the city guard caught him selling our healing herbs on the black market. They say he clawed his way up the city wall and was away before any of the guards could reach him.”

Prowlers are critical to the Tigran’s mobile attack force. Unlike other Tigran warriors, prowlers are stealthy and have incredible constitution. They may lack high defense or armor found on typical infantry, but make up for this with their stealth, Martial Arts ability, and Improved Wallclimbing. Prowlers have the new Bloodthirsty Ability, and Coup De Grace, for extra damage versus incapacitated targets.

“Yaka dresses in Destroyer’s Flame. His breath is the Heat of Life. I serve the god of the Greatest Star. Yaka raises His head in the morning, drives His chariot across the sky, and hides His face at night. I revere Him by throwing beams of pure sunfire. My shield enables me to embrace Yaka’s body. My mane is His corona of fire. I am His devout tribute.”

— “Prayer of the Sabretooth” by Charioteer Felixine

Tigran Cavalry consists of light chariots functioning as mounted skirmishers. Drawn by sabretooth tigers they share the race’s core abilities such as the predator and athletic abilities, with good melee abilties. Although far more fragile than the cavalry of other races, the charioteers can hurl enchanted sun spears, powerful single shot weapons that do physical and fire damage, and can set opponents on fire.

“The Tigran Sun Guards encircled the shrine of the Scarlet Destroyer. I tried to convince the feline spearmen that in the Commonwealth, all share the Shrine, but they believe those shrines hold pieces of their god, Yaka. Though they had little armor, their catlike agility rendered our archers ineffective. We had to clear them out, but they fought with the ferocious zeal of jungle cats. I fear the cost to the Empire if all our shrines are so abused.”

This armored Pikeman is the only unit that resembles something of a organized military unit. These pikemen carry Sun Shields, giving them +2 defense and resistance from non flanking attacks and +60% fire protection. Sun Guards also have the Guardbreaker abilty, meaning that melee strikes from the unit will stop their targets from guarding. Sun Guards are flexible units, but have slightly weaker stats than other pikemen to reflect their lack of specialization in any one role.

“The Tigran religion has changed since I last encountered them. They once envied men, doing all they could to prove they weren’t animals. Now there is a powerful faction of Mystics that teach them to embrace their inner beast for their sun god. Some Mystics literally do.  One morphed into a ravenous hellcat.  Despite my most desperate attempts to reason with it, the creature tried to eat me.  So while pretending to fight, I deliberately tripped and tumbled down a gorge.”

— “Where’s Symba?” by Ham the Wanderer

The Mystic is an offensive support unit, who hurls magic bolts at ranged targets and can use the Break Control ability to remove mind controlling effects from her allies. Where other support units have abilities that buff allies or debuff enemies, the mystic can transform into a Panther, sacrificing ranged power for melee strength and speed.

People ask me how one negotiates with an oversized feral black tiger. It’s a stupid question, because when you see one it’s probably too late. Still, I seem to recall I said something like, ‘Whoah! Nice Kitty. That’s one seriously big cat. No, no! Bad Kitty. I’m not food. Stop! Don’t eat me!’”

— “Where’s Symba?” by Ham the Wanderer

Mystics can transform into Dire Panthers, powerful and agile melee units which can pounce on enemies to rapidly cross great distances in combat. Its bloodthirsty abilty ensures that it does extra damage vs bleeding units, while its Coup de Grace abilty deals extra damage vs immobilized units.

“The double-bladed skalj buzzed over our heads like a swarm of angry hornets. A group of Tigran shredders flanked our diplomatic envoy. Our maddened horses charged furiously forward. The cabin of our carriage filled with a spray of splinters. Hundreds of Skalj blades embedded themselves into the side of our vehicle. Hostile Tigrans scrambled up the carriage walls. They cut the throats of our drivers and let our horses run. The diplomatic message was quite obvious.”

The Archer-soldier of the Tigran. Unlike the average archer, Shredders are quite strong in melee as well. They throw boomerang like knives, which a skilled shredder can curve around corners, allowing them to ignore line of sight penalties. Their knives also cause bleeding wounds, creating a synergy with the Prowler who does extra damage vs bleeding units.

“We all knew what dwelt in Hillside Tomb.  The clever thing offered fortunes to anyone able to outwit it. Caleb Withers went in a beggar and left royalty, but thousands of others never returned. The Commonwealth judged this bargain illegal. They brought their war machines against the creature. It called down the sun to incinerate the advance.  It retreated into its lair. Foolishly, they followed, but it was ready. Traps slowed warriors; the creature finished them off. Even disciplined troops trembled with fear. Eventually, the Commonwealth drove it away using overwhelming numbers. That’s the price of bargaining with a sphinx.”

– “Monsters of Hillside” by Olden Withers

In rare occurrences, Tigrans are born with wings and a more feline body. These creatures are called Sphixes and are revered as holy emissaries from Yaka. They have the Sun Disc Ability, allowing them shoot a ray as hot as the sun, damaging all units in its path.  This flying tier III irregular can cause fear, has mind control immunity and True Sight.